judy@jwsmithco.com
At J.W. Smith & Company, Judy will most likely be your initial phone contact. She works at the front desk in role of scheduling, billings and accounts. Judy joined the company in 2000 after several years of industry experience and she holds a bachelor degree in finance from the University of Nebraska

As the Lead Project Coordinator, Guy works hand-on with the crews and is the primary on-site contact for J.W. Smith & Company at commercial construction projects. Guy joined the company in April of 1996 and is currently one of the most experienced, active members of the trade in the Omaha area with an impressive 25years of experience. He is EPA certified and holds multiple Journeyman Licenses including the City of Omaha, surrounding areas and the State of Iowa.

cindy@jwsmithco.com
Cindy has been with J.W. Smith & Company since 1977, when she was hired on as a secretary. Since that time, she worked her way into the position of office manager, where a variety of tasks keep her busy each day. On a personal note, Cindy and her husband will celebrate their 40th wedding anniversary this year. Congrats! 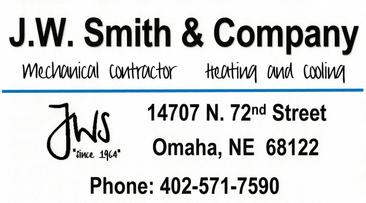 mark@jwsmithco.com
After working in the business for many years, Mark was appointed president of J.W. Smith & Company in 1992. Currently, he manages the day to day business operations, and works as an estimator and project coordinator. Mark has a vast knowledge of the HVAC industry and an extensive education, with several industry-specific certifications including EPA and refrigeration. He holds Master Licenses with the Cities of Omaha, Bellevue, Papillion, LaVista, and Blair and with the State of Iowa.

Matt is the Senior Service Technician at J.W. Smith & Company. He joined the company in April of 2001. Matt is extremely experienced and very versatile in his repair capabilities. He has amassed over 18years of HVAC repair know-how on various types of equipment. Matt is a well-educated technician in the heating and cooling industry and holds EPA, Trac Pipe, Gas Tite certifications and holds City of Omaha and State of Iowa refrigeration and HVAC licenses.